The da Vinci Surgical System is a robotic surgical system made by the American company Intuitive Surgical. Approved by the Food and Drug Administration (FDA) in 2000, it is designed to facilitate complex surgery using a minimally invasive approach, and is controlled by a surgeon from a console. The system is commonly used for prostatectomies, and increasingly for cardiac valve repair and gynecologic surgical procedures.[1][2] According to the manufacturer, the da Vinci System is called "da Vinci" in part because Leonardo da Vinci's "study of human anatomy eventually led to the design of the first known robot in history."[3]
Da Vinci robots operate in hospitals worldwide, with an estimated 200,000 surgeries conducted in 2012, most commonly for hysterectomies and prostate removals.[4] As of June 30, 2014, there was an installed base of 3,102 units worldwide, up from 2,000 units at the same time the previous year. The location of these units are as follows: 2,153 in the United States, 499 in Europe, 183 in Japan, and 267 in the rest of the world.[5] The "Si" version of the system costs on average slightly under US$2 million, in addition to several hundred thousand dollars of annual maintenance fees.[6] The da Vinci system has been criticised for its cost and for a number of issues with its surgical performance.[2][7] 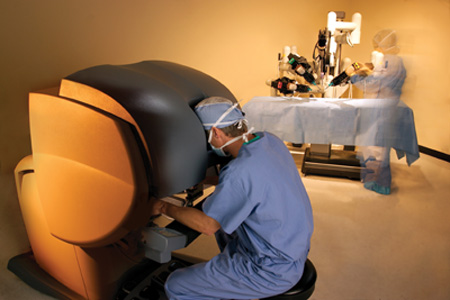